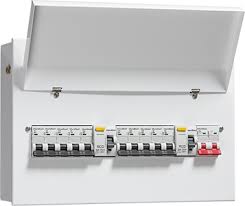 1. Why are these changes being made?
Further to several household fires involving plastic consumer units, investigations by the Glasgow fire brigade, has concluded that a key cause of the fires was substandard cable connections made by the Electrician within the consumer unit.
These resulted in overheating, which subsequently ignited the plastic enclosure.
The draft of Amendment 3 proposes changes to the fire protection regulations in BS 7671 Wiring Regulations. If approved, these changes will be incorporated in the 17th Edition of the Wiring Regulations, due to be published in January 2015. IET Chief Engineer Geoff Cronshaw interviews London Fire Brigade investigator Charlie Pugsley to find out more about the reasons behind these changes

2. What constitutes a substandard cable connection?
Many factors may contribute to a substandard connection. Some of these are inadequate tightening of conductors in the internal devices’ terminals or clamping the insulation of the cable rather than the conductor with the terminal screw.
In the third amendment, it is expected that the schedule of inspections for new installation work and condition report for existing installations, will require confirmation that all conductor connections within a consumer unit or distribution board are correctly located in terminals, and are tight and secure. Contactum would recommend that the manufacturer’s published tightening torques are adhered to.
3. What are the proposed changes?
It is anticipated that when the third amendment of BS7671:2008 is published in January 2015 it is expected to state under new regulation 421.1.200:
Within domestic (household) premises, consumer units and similar switchgear assemblies shall comply with BS EN 61439 3 and shall: (i). Have their enclosures manufactured from non-combustible material, or (ii). Be enclosed in a cabinet or enclosure constructed of non-combustible material and complying with Regulation 132.12.
NOTE 1: Ferrous metal e.g. steel is deemed to be an example of a non-combustible material.
NOTE 2:* the implementation date for this regulation is the 1st January 2016. This does not preclude compliance with this regulation prior to this date.
4. What is the intent of the new regulation?
The intent of regulation 421.1.200 is considered to be, as far as is reasonably practicable, to contain any fire within the enclosure and to minimise flames from escaping; caused mainly as a result of poorly installed connections.
5. What is meant by ‘’non-combustible”?
There is no published definition for “non-combustible” that aligns with the intent of regulation 421.1.200. Ferrous metal, e.g. steel is deemed to be one example of a non-combustible material that meets the intent of the regulation.
6. What is meant by ‘within domestic (household) premises’?
It is understood that Regulation 421.1.200 applies to consumer units and similar switchgear assemblies to BS EN 61439-3 inside all domestic (household) premises including their integral/attached garages and outbuildings or those in close proximity.
7. What impact will this regulation have?
This would mean that eventually all new consumer units installed in UK homes, i.e. within domestic (household) premises, as defined in point 6 above; must have their enclosures manufactured from a non-combustible material, or be enclosed in a cabinet or enclosure constructed from a non-combustible material. Metal (Steel) enclosures are deemed to offer the best non-combustible characteristics.
8. Has Contactum been involved with these proposed changes?
Contactum have been closely involved in the development of these changes by providing expert industry liaison with interested bodies which including BEAMA (British Electrotechnical and Allied Manufacturers Association). Contactum are committed to delivering the highest quality products which afford maximum consumer safety.
9. When will Amendment 3 come into effect?
The third amendment to BS 7671:2008 will be issued in January 2015 and is intended to come into effect on 1st July 2015. Installations designed after 30th June 2015 are to comply with BS 7671:2008 incorporating Amendment 3, 2015.
However, Regulation 421.1.200 does not come into effect until the 1st January 2016. This does not preclude compliance with this regulation prior to this date.
10. Does this mean all installed consumer units with plastic enclosures are a fire risk?
No, provided the consumer unit and its incorporated components conform to the relevant product standard(s), do not have latent defects, and have been installed correctly to the manufacturer’s instructions.
electricians giffnock